​From Miniskirt to Hijab: A Girl in Revolutionary Iran 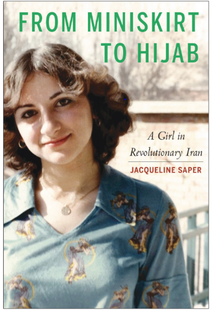 Published by Potomac Books of the University of Nebraska Press. 240 pp., 6X9, 14 Photographs, ​1 map, ​glossary, Discussion Guide. Available as a hardcover book or Kindle Format. Featured in Goodreads and the Library of Congress.

​The United States:​ Potomac Books of the University of Nebraska Press, Amazon, Target, Alibris, bookdepository, IndiBound.org.​
Barnes and Noble.
The United Kingdom: WHSmith, Casemate, ​Foyless, amazon.co.uk, ​Canada: Indigo,  Australia: Booktopia New Zealand: mightyape
Germany: amazon.de, jpc.de  France: amazon.fr  Spain: amazon.es
The Netherlands: bol.com China: books.com.tw and sanmin.com​​​Mexico: Rakuten Kobo and amazon.com.mx  Romania: ​elefant.md
Italy amazon.it Estonia rahvaraamat.ee India amazon.in
Japan amazon.co.jp Russia  https://www.twirpx.com/file/3102164/
ABOUT THE BOOK
​Jacqueline Saper, named after Jackie Kennedy, was born in Tehran to Iranian and British parents. At eighteen, she witnessed the civil unrest of the 1979 Iranian revolution and continued to live in the Islamic Republic during its most volatile times as well as the Iran-Iraq War. In a deeply intimate and personal story, Saper recounts her privileged childhood in pre-revolutionary Iran and how she gradually became aware of the paradoxes in her life and community— primarily the disparate religions and cultures.

In 1979 under the Ayatollah regime, Iran became increasingly unfamiliar and hostile to Saper. Seemingly overnight, she went from living a carefree life of wearing miniskirts and attending high school, to listening to fanatic diatribes, forced to wear the hijab, and hiding in the basement as Iraqi bombs fell over the city. Saper eventually fled to the United States in 1987 with her husband and two children after, in part, witnessing her six-year-old daughter’s indoctrination into radical Islamic politics at school. At the heart of Saper’s story is a harrowing and instructive tale of how extremist ideologies seized a Westernized, affluent country and transformed it into a fundamentalist Islamic society.
EDITORIAL REVIEWS

​"From Miniskirt to Hijab: A Girl in Revolutionary Iran provides a memoir not just of Jacqueline Saper, but of a pivotal time in conservative Iran, and should be required reading for anyone interested in the social evolution of Iran and women's changing experiences and roles in that country. Saper is in a unique position with her ability to contrast everyday life under the Shah versus the Ayatollahs. She charts the roots and rise of turmoil in that country with a focus on political and social change, capturing the fear and confusion of navigating a suddenly-strange land with new rules and threats. Her personal focus in From Miniskirt to Hijab captures the newly created Islamic Republic of Iran and its impact on ordinary lives. These inviting, candid, emotional observations should be required reading for any Middle East history reader interested in the evolution of Iranian society in modern times. --Diane C. Donovan, Donovan’s Bookshelf)

“Richly informative, From Miniskirt to Hijab captures a difficult time in Iranian history with honesty and candor. Saper demonstrates her love for the country of her birth while realistically discussing some of the challenges confronting a non-Shiite in a very conservative society.” - Mateo Mohammad Farzaneh, associate professor of history at Northeastern Illinois University and author of The Iranian Constitutional Revolution and the Clerical Leadership of Khurasani.

“From Miniskirt to Hijab is a deeply moving memoir that vividly details the struggle of human life—both collective and individual—under authoritarian rule. Saper’s insightful and compelling narrative is extraordinary in its use of personal perspective to mourn the rapid loss of Iran’s once progressive society. This book is both an important historical account and a cautionary tale, a poignant reminder of the devastating impact an unchecked regime has on its unwilling participants.” - Bardia Fard, chapter president of the Iranian-American Bar Association.

“From Miniskirt to Hijab is the best book yet to explain the contrast of life under the rule of the Shah versus that of the Ayatollahs. Saper is uniquely able to articulate the underlying dynamic of Iran’s sudden rejection of a Western culture that was idealized for years before 1979. This book is a must-read for anyone who wants to understand the causes of turmoil in one of the most volatile regions of the world.” -  Bobak Kalhor, director and producer of A Dying King: The Shah of Iran. 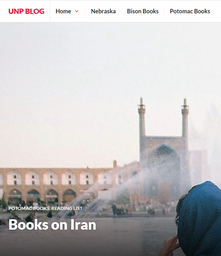 UNIVERSITY OF NEBRASKA PRESS BLOG: Potomac Books Reading List: Books on Iran
​Given the recent news cycle, we would like to highlight four fantastic, timely books about Iran published under our Potomac Books imprint. If you want to educate yourself and gain a new perspective, these are the titles for you. Read more.
ABOUT THE PRESS
The University of Nebraska Press has been the bastion of intelligent, thoughtful literature. They make it their mission to pick the smartest, sharpest minds in the business. UNP was launched in 1941 and has published more than 4,000 books, adding another 150 new titles each year, making it the 12th largest university press in the United States. The press is selected to be one of the 17 most innovative university presses in the country. It also boasts the reputation of being the largest and most diversified University Press between Chicago and California.

The University of Nebraska Press has 4 imprints- Bison Books, The Jewish Publication Society, Potomac Books, and The Backwaters Press. Potomac Books began in 1983 and in 2004 expanded its catalog to include world and national affairs, presidential history, diplomats and diplomacy, and biography and memoir. UNP purchased Potomac Books in 2013.

Since 2010, two of UNP's books have received the Bancroft Prize, the highest honor bestowed on history books in the U.S. With nearly 200 translated titles currently in print from five different languages, including two titles by J.M.G. Le Clézio, the 2008 winner of the Nobel Prize for Literature, the number and breadth of translated titles has distinguished UNP as one of the largest, most active American publishers of translated work.
Sources:
https://unpblog.com/2010/02/09/20000-award-to-help-support-unp-translation-program/
https://en.wikipedia.org/wiki/University_of_Nebraska_Press